Carcinoid tumours of unknown origin (CUO) account for 10% for all neuroendocrine tumours (NETs) (1). Lack of a primary source poses difficulties with regard to optimum treatment strategy for these tumours and prediction of future metastatic recurrence. Utilisation of 68-gallium Dotatate PET-CT offers increased sensitivity and characterization of CUO, compared to traditional octreotide scans (2). Development of this may allow investigation into the mesentery as a potential primary site.

The European Neuroendocrine Tumour Society (ENETS) strives to generate gold standard guidelines for the treatment and management of all carcinoid tumours (9). However to date there is no reference to primary mesenteric or mesorectal carcinoid tumours. In the absence of correct classification and guidelines on mesenteric carcinoids it is difficult to know how best to survey and manage such patients following initial curative resection. Herein we describe the case of primary mesorectal carcinoid tumour with interval nodal recurrence and the treatment and management plan undertaken.

Computed tomography (CT) thorax abdomen pelvis (TAP) revealed a 4.2 cm (AP) × 3.8 cm (transverse) predominantly solid appearing lesion in the right ischiorectal fossa, a clear plane was not visible between the mass and the upper 3rd of rectum and with the mass infiltrating the surrounding fat of the mesorectum. There was no associated local lymphadenopathy evident or distant metastasis. Subsequent MRI pelvis further defined this as a 3.5 cm well defined, encapsulated, lobulated mass confined to the right ischioanal space, but closely applied to the undersurface of the levator plate (Figure 1). A CT-guided transanal biopsy confirmed a well differentiated neuroendocrine tumour, grade 1. Positive tumour markers included: CD56, Synaptophysin & Chromogranin and a low proliferation index (1–2%) was reported. Serum chromogranin A levels were also elevated at 122 ng/mL (27–94 ng/mL). Based on the above findings a diagnosis of carcinoid tumour was made. The tumour was located within the mesorectum but distinct from the rectum itself therefore the nomenclature of a primary mesorectal carcinoid was assigned. An octreotide scan was performed and was normal with some scattered foci in the pelvis. Thus locoregional disease was outruled and surgical resection planned as definitive treatment. Due to the close proximity of the tumour to the rectum a laparoscopic ultra-low anterior resection with ileostomy formation was performed. Histopathology results of the resected specimen (Figure 2), reported a well differentiated neuroendocrine tumour, grade 1 with lymphovascular & perineural invasion. Mitotic index was <1/10 high power fields & Ki-67 <2%. Five lymph nodes were negative for malignant disease. 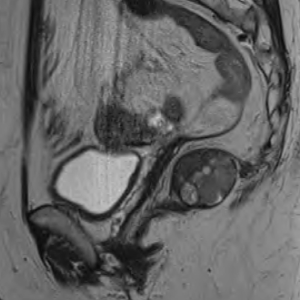 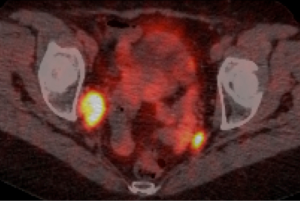 Primary mesorectal carcinoid tumours have not yet been described in the literature. However since the classification of the mesentery as an organ in 2017, carcinoid tumours occurring in the mesentery should be considered as primary mesenteric carcinoids rather than the previous term of CUO when a solid organ is not involved. Carcinoid tumours are a specific type of neuroendocrine tumour (NET) originating from enterochromaffin cells, which are a subset of Amine Precursor Uptake Cell (APUD) series (derivatives of neural crest cells) (10). Neural crest cells migrate along the dorsal mesogastrium in the early embryonic period to reach their target locations in the primordial respiratory and gastrointestinal tracts (11). However should molecular signalling pathways that direct this process be disrupted it is possible that nests of APUD cells become dispersed in the dorsal mesogastrium, which subsequently could result in primary mesenteric carcinoid tumours. However this theory has yet to be investigated.

Primary mesorectal carcinoid tumours effectively illustrate the anatomy of the mesorectum. Superiorly, the mesorectum is formed by the union of the mesosigmoid at the pelvic brim (3). This continues inferiorly ending at the pelvic floor, where it has a caudal connection with Waldeyers fascia, now thought to be contiguous with Toldt’s fascia (12). This caudal connection is approximately 3–5 cm from the anorectal junction and thus is the most inferior extension of the mesorectum. The anatomical boundaries of this case’s tumour reflect these parameters, abutting the levator plate. As such future radiographic identification of lesions within these anatomical limitations should prompt the consideration of a mesorectal carcinoid.

With the evolution of 68-Gallium Dotatate PET CT imaging detection and characterization of primary mesenteric carcinoid and morphology is possible. This is due to the improved image resolution and ability to detect smaller lesions, with a 93% sensitivity compared to the Octreoscan, which has a sensitivity of 75% (2) in identifying carcinoid tumours and deposits. Previously described as CUO, enhanced understanding of the mesentery and improved imagining modalities can now support the mesentery as a primary site of carcinoid development and growth as in this case. In 2015, Kamath et al. (13) also highlighted a case of two primary mesenteric carcinoid tumours. Initially when identified the tumours were thought to be CUO, however utilisation of Dotatate positron emission tomography (PET) delineated a second tumour in the mesenteric root with no solid organ involvement. This confirmed the primary source to be the mesentery. Both Kamath et al. (13) and our case reports are comparable and suggest that mesenteric carcinoid tumours should be differentiated in patients with non-specific, progressive gastrointestinal (GI) symptoms and normal endoscopic investigations.

Currently European Neuroendocrine Tumour Society (ENETS) guidelines do not reference primary carcinoid tumours or their specific management. While it is likely the primary treatment of surgical excision will remain unchanged, the more discriminating factors of number of lymph node resected and management of recurrence needs to be formally documented. In the case of primary mesorectal carcinoid, a total mesorectal excision (TME) with the inclusion of at least twelve lymph nodes would at least theoretically offer the best option for a successful oncological resection when abiding by colorectal cancer management standards (14). However as is clear from this case, primary mesenteric tumours particularly of the hindgut present a challenge with regard to the pattern of metastasis.

The lymphatic contiguity between the mesentery and the intestine allows for the spread of disease (15). This intimate relationship can also allow for systematic calculation as to the target area for metastasis. Primary mesenteric carcinoid tumours that develop in the fore- or midgut have been shown to present with carcinoid syndrome or liver metastasis (16). This can be explained by the embryological development of the mesentery (12). Fore- and midgut organs, including the liver develop in the ventral mesogastrium, while the hindgut develops in the dorsal mesogastrium (11). The root of the mesentery is just left of the midline behind the second part of the duodenum, at the origin of the superior mesenteric artery (15). The lymphovascular supply of the GI tract passes through the mesenteric root and drains to the liver via the portal system. Hence it can be hypothesized that direct metastatic spread from the fore- and midgut mesentery to the liver is so frequent due to their embryological development and consequential direct hepatic drainage via the mesenteric root.

However, mesorectal lymphatic drainage may not follow such a definitive pathway as they have not yet reached the mesenteric root. At the end of the embryonic period, retroperitoneal lymph sac at the mesenteric root on the posterior abdominal wall is described, draining the primordial gut, with the cisterna chyli located dorsally (11). Subsequently these develop into groups of lymph nodes. Therefore before the hindgut drains into the mesenteric root, there a number of lymph node groups into which a primary mesorectal carcinoid tumour could potentially metastasize. This is of prognostic importance and is a current topic of interest in rectal cancer. Dev et al. (17) first suggested the concept of a ‘vulnerable field’ in lower rectal cancers, which identifies that lateral pelvic lymph node metastasis most commonly, can occur in the obturator space. It is postulated this involves a process enabled by extension of the rectal lymphatics via the lateral ligament passing through the obturator space towards the internal iliac artery (17). Fujita and Yamaguchi (18) and Beppu et al. (19) detail right sided obturator node metastasis after treatment for rectal cancer. These observations are comparable to those of the present case report. Lateral pelvic lymph node adenectomy would be the primary mode of treatment for this. However when multiple areas of metastasis exist, the diameter of the affected nodes is the most efficient pre-operative method to determine the effectiveness of lateral pelvic lymph node dissection (20). Furthermore this tendency toward right-sided obturator nodal metastasis may reflect the asymmetric process of lymphangiogenesis (21).

Primary mesenteric carcinoid tumours and primary mesorectal carcinoid tumours pose a number of challenges as highlighted by this case. Correctly identifying and naming the primary site, optimum operative approach and patient counselling regarding follow-up and surveillance require MDM discussion and consensus. With ever expanding knowledge of gastrointestinal anatomy based on mesenteric principles, previously unexplained tumour aetiology such as CUO need re-evaluation and the mesentery may be considered a primary source in such cases.

Conflicts of Interest: The authors have no conflicts of interest to declare.

Ethical Statement: The authors are accountable for all aspects of the work in ensuring that questions related to the accuracy or integrity of any part of the work are appropriately investigated and resolved. Written informed consent was obtained from the patient for publication of this manuscript and any accompanying images.